As you may know, there are many avenues of potential exploration when it comes to breathing techniques, protocols, and technologies. Recently I have been reading about a revolutionary way to increase health and oxygenate the body that I think after understanding the implications you will be just as excited to hear about!

Meet Manfred Von Ardenne, the man who helped develop an atomic bomb… and an astonishingly simple technique to oxygenate the body and heal disease.

Ironically, the same man who worked on the atomic bomb also developed an incredibly powerful technology for health, not destruction!

Manfred von Ardenne (20 January 1907 – 26 May 1997) was a German research and applied physicist and inventor. He took out approximately 600 patents in fields including electron microscopy, medical technology, nuclear technology, plasma physics, and radio and television technology. From 1928 to 1945, he directed his private research laboratory Forschungslaboratorium für Elektronenphysik. For ten years after World War II, he worked in the Soviet Union on their atomic bomb project and was awarded a Stalin Prize. Upon his return to the then East Germany, he started another private laboratory, Forschungsinstitut Manfred von Ardenne. (Wikipedia)

His discovery was that when you add exercise (light to moderate depending on your condition) when breathing in oxygen, the benefits are almost unbelievable! He originally called this therapy Oxygen Multistep Therapy and later on people started calling it Exercise With Oxygen Therapy (EWOT).

Whats the Difference Between Breathing in Oxygen with and without Exercise?

Put quite simply, everything.

When we use oxygen without exercise, most people can feel the benefits although they are only short lived and oxygen use comes with some cautions.

Using oxygen while exercising is entirely different because during exercise you are increasing your heart rate, circulation, and respiratory intensity. This drives the extra oxygen into your tissues, organs, and nervous system, via your blood plasma which after a few to about 15 minutes of exercise is super saturated with o2.

Take note on the importance to have a balance of co2 and oxygen. As outlined in my article here, many disease states relate to a deficiency in co2, which causes low o2 as well. It is profoundly more effective when using oxygen to increase your co2 in your body by exercising to allow a safe and effective session that will give you lasting benefits.

Using Mark Squibb’s revolutionary system which run an EWOT system with an added reservoir, or any other EWOT system which utilizes a greater volume of oxygen than the 5-10 litres per minute supplied by the concentrator alone, a dramatic therapeutic turnover can be possible within the timespan of 15 minutes.

Most treatments take multiple applications as is the case with hyperbaric oxygen therapy which some patients need upwards of 80-100 treatments for difficult conditions which don’t respond well to conventional medicine. Though EWOT principles can be used in other ways in which people who can’t physically exercise will still benefit such as exercising while on a full body vibration machine, or using oxygen while resting in a sauna.

Turning Back the Clock… 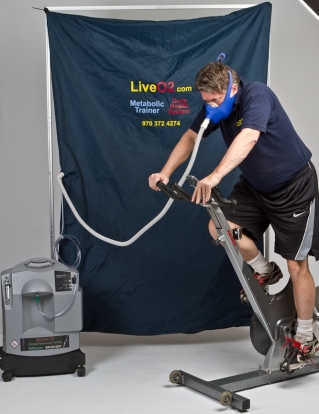 Exercising with oxygen is a biohacker’s dream.

Not many things can come close to the vitality building versatility of oxygen. Oxygen is the keystone of metabolic along with cellular health and is essential for healing wounds, proper sleep, focus and concentration, the immune system, and proper nervous system function among many other things.

On the contrary, Manfred also noted across the spectrum with a variety of diseases and ages, that when exercise with oxygen treatment was given, there was a sharp increase in Po2 and tissue oxygenation (in some cases, sick or elderly people could get back to having near oxygen levels of youth!). Because of this astonishing oxygenation, I believe there is almost no other therapy which has the same level of positive effect on the body to counter the effects of stress and inflammation and the other components which lead to hypoxia.

Some ways that EWOT (used with a proper protocol) can be a powerful ally for not only athletic recovery and endurance, but also therapeutic treatment for those who have metabolic dysfunction or illness:

Above: Manfred Von Adrenne’s technique using focused heat over the tumor while breathing in o2 (look at those results!) which he called cancer multistep therapy.

Or here is another list of benefits from the site oxygenhealingtherapies.com: This is a direct quote from the German Researchers who showed that Exercise With Oxygen Therapy is “effective for various indications: renormalization of the O2 loading of the blood in the lung functionally degenerated by old age or severe stress; early stage of cataract, glaucoma, loss of field of vision, impaired focus; angina pectoris, arrhythmias, prophylaxis and rehabilitation for heart disease; edema; peripheral circulation disorders, especially in the lower extremities; circulation disorders, dizziness of old age, senile diabetes; hypertension; general acceleration of any rehabilitation program;” lasting increase in physical performance capacity; defense stimulation (immune system stimulation), especially after classical cancer treatments that use radiation and chemotherapy.”

Other similar therapies and final notes

With the incredible power and wide scope of application that EWOT provides, will anything compare?

If you currently don’t have access to this technology or are completely unable to exercise, there are other ways to gain similar benefits, though the might take quite a bit longer to achieve. Exercise with oxygen is part of a spectrum of therapies called oxygen therapies and they are gaining popularity around the world.

As mentioned before, hyperbaric oxygen therapy can take significantly longer to achieve similar results as EWOT, but has a long reputation of being a technology which can help with hard to treat conditions such as burns, unhealing wounds, stroke, brain trauma, and the benz (from scuba diving).

Ozone therapy and hydrogen peroxide are also gaining popularity and one ozone doctor I highly recommend checking out is Dr. Robert Rowen.

I foresee Exercise With Oxygen becoming an integral part of holistic medicine, and sports performance optimization tools in the near future. Already, EWOT is being adopted in naturopathic and chiropractic clinics in some parts of the United States, and in people’s homes across North America and Europe. Set up a system in your home or office today and become part of the next wave of cutting edge healing and anti-aging medicine!